Theatre Puppets – The Stars of The Show

Widely considered a masterful form of expression, puppetry has been at the centre of storytelling for thousands of years. The art form dates back to Ancient Greece in the 5th century BC, ranging from simple finger puppets to mechanical puppetry requiring complex construction and operation. In theatres today, puppetry can be witnessed on a remarkable scale. From AVENUE Q to Life of Pi, this article will explore how theatre puppets elevate the performance of many of the UK’s biggest productions. 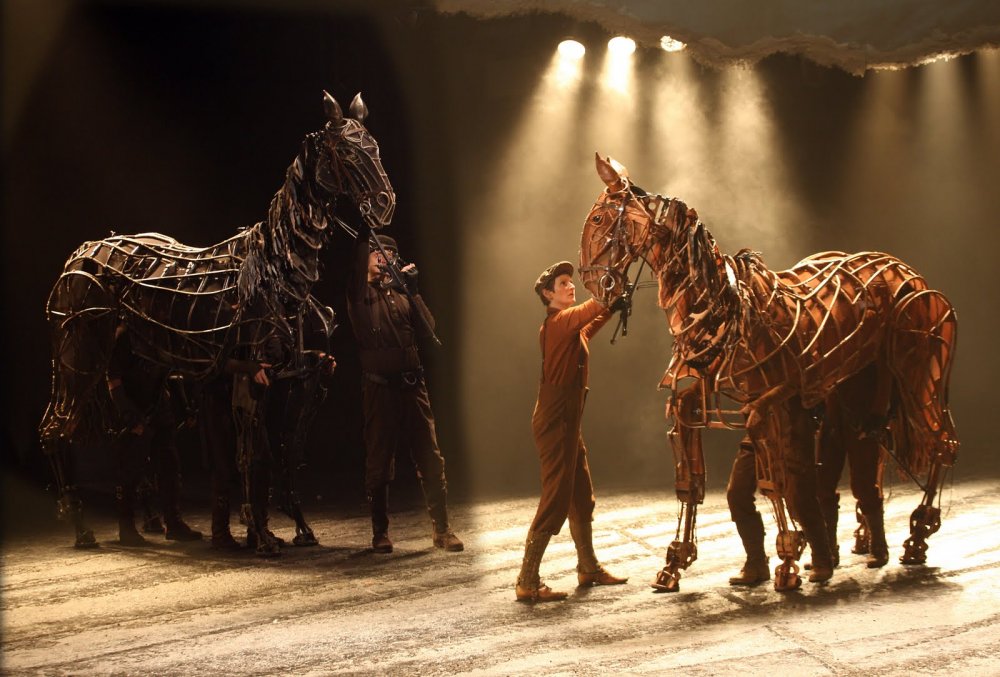 The award-winning musical AVENUE Q was originally inspired by the popular children’s show Sesame Street. However, instead of child-friendly topics, the performance combines adult humour, profanities, and relatable storylines to connect with its audience.

We follow the journey of Princeton, an eager graduate moving to the city. With a tight budget, Princeton moves into a cheap apartment on AVENUE Q where he meets his diverse and quirky neighbours. Together, they navigate the calamity that is life. Most of the characters in AVENUE Q are puppets, ranging from live-hand puppets and rod puppets to theatre puppets operated by trigger mechanisms. Each puppet took approximately 120 hours to handcraft, costing upwards of £7500.

George Orwell’s novel Animal Farm has recently been transported to UK theatres; in this case, the story of the Russian revolution and totalitarianism is enacted mainly by theatre puppets.

The stage is full of large horses, flapping pigeons, squawking hens, colourful geese, and brute pigs. While ten actors create the puppets’ voices, a total of fourteen puppeteers operate them with incredible coordination. In two breathtaking scenes, the animals battle for power on the farm, creating an exhilarating spectacle that sparks the imagination of its audience.

Set at the beginning of World War One, War Horse takes its audience on an emotional rollercoaster following Albert, a young boy, and his beloved horse, Joey. The two friends are separated when Joey is sold to the Cavalry and shipped to France. Albert, who is too young to serve in the war, embarks on a treacherous journey in the hope he can bring Joey home.

The story follows the growth of Joey from foal to horse, which is replicated using a series of life-size theatre puppets designed by the Handspring Puppet Company of South Africa. The largest puppet weighs approximately 120 pounds and incredibly can support a rider on its back.

Once the puppets had been built, various in-depth studies were conducted on horse movements to help the puppeteers imitate subtle ear and tail movements, as well as synchronise breathing to really bring the wicker horse to life on stage.

Disney’s The Lion King is unsurprisingly one of the longest-running shows in the UK. The story features a wide range of animals, from hyenas to gazelles, from elephants to lions, all of which come to life through extravagant headdresses, captivating masks, and a total of 235 theatre puppets.

Inspired by Japanese Bunraku puppetry, each puppet was designed to keep the puppeteer visible to the audience. To celebrate its innovation, the show was awarded the Tony for Best Costume Design of a Musical and Outstanding Puppetry Design.

During the play, the audience follows Pi Patel, a young man who is cast away after a disaster at sea. On a small lifeboat, he tries to survive alongside some unexpected characters, including a hyena and a male Bengal tiger.

Perched on the back of the lifeboat, four puppeteers operate the gigantic Bengal tiger puppet. Each of the tiger’s joints moves independently, secured to its spine using bungee rope to enable fluid movement. One performer operates the tiger’s spine, another swishes its tail and moves its hind legs, the third moves the beast’s front paws, and the fourth is the creature’s voice, controlling its head and jaw also. Incredible coordination and choreography are required to deliver lifelike movements on stage effectively.