Are you looking for a marketing technique that will make you stand out from the crowd with the added benefit of publicity and all while communicating a clear brand image for your business or company?

Mascots and puppets have been used in advertising for many years and have come to form the backbone of hundreds of image-conscious and well-marketed companies worldwide. Whether it is because such icons conjure up nostalgic feelings about childhood or are provocative of emotions from an identifiable character is not known. However, they can become an important element of a business marketing campaign.

Here we take a look back at some nostalgic and controversial mascots and puppets used over the past five decades that have produced the desired effect for businesses and brands worldwide:

Tony the Tiger has appeared on the cereal box of Kellogg’s Frosties for more than 60 years. His iconic appearance has barely changed over this time and Tony’s memorable slogan, “They’re Grrrrreat!”, has helped Kellogg’s sell millions of boxes of the frosted flakes worldwide.

We’ve seen a little less of Tony since 2010 when Kellogg’s switched their TV advertising to more health-focused cereals such as All Bran and Special K. However, for generations of people Tony the Tiger will always be a favourite character that reminds them of their childhood.

Cute puppet Zingy was launched in April 2012 in a television marketing campaign by energy company EDF Energy. The launch sparked a flood of requests on social media about how people could get their hands on the little puppet. Many people attempted to make their own and EDF even set off a flurry of excitement, giving consumers a glimmer of hope that Zingy would be put into production. If nobody knew who EDF was before 2012, they definitely do now. 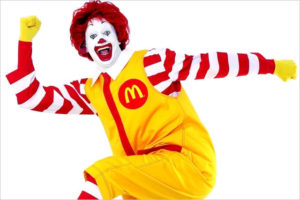 The primary mascot for McDonald’s is a fairly simple and successful idea, using a clown character to appeal to kids and families. Ronald had an interesting back-story, inhabiting the fantasy world of McDonaldland with his friends Mayor McCheese, The Hamburglar, Grimace, Birdie the Early Bird and The Fry Kids. Although McDonaldland has now largely been phased out, Ronald is still going strong, and at one point the fast-food chain had over 300 people employed to play the character.

The Duracell Bunny first appeared in 1973 in a television commercial showing the bunny alongside other pink bunny rabbits who were all playing the drums. As the pink bunnies ran out of power one by one, we’re left with the Duracell Bunny still playing. The Duracell bunny was both endearing and applicable to kids and adults alike, particularly useful in Christmas advertisements.

This bunny puppet was created in the late 80s by Duracell rival Energizer as a parody to their battery competitors advertising campaign. The Energizer bunny also played the drums and like it’s Duracell rival kept on playing as rival bunnies ran out of power. While this may have seemed like a great marketing idea at the time, Energizers sales actually dropped while the ads were running. People associated drumming bunnies with Duracell and so Energizer may have been helping their rival more than their own brand.

Ready To Create Your Own?

At Promotional Props and Costumes, we can help you create an innovative idea to promote your brand or business. Our team of professional puppet makers and mascot costume designers have years of experience and expertise and will bring your idea to life.

For more details about our range of services, please get in touch.