As you can imagine, here at Promotional Props and Costumes, we love seeing people in wacky mascot costumes. One of the best places to catch them all frolicking about is at one of the UK’s many marathon events.

For many years now it has been becoming more common for people to wear a costume when running a marathon. You’re not likely to see Mo Farah dressed up as Dalek. However, for amateur runners, especially those running on behalf of a charity, a costume is often considered essential.

The general idea behind dressing up is to get more people to notice you, and in some instances, make the event even more challenging. Many runners will be carrying buckets for spectators to donate on the day. An outlandish outfit will help raise more cash. For those who really like a challenge dressing up in a costume not suited to running can help generate more donations. 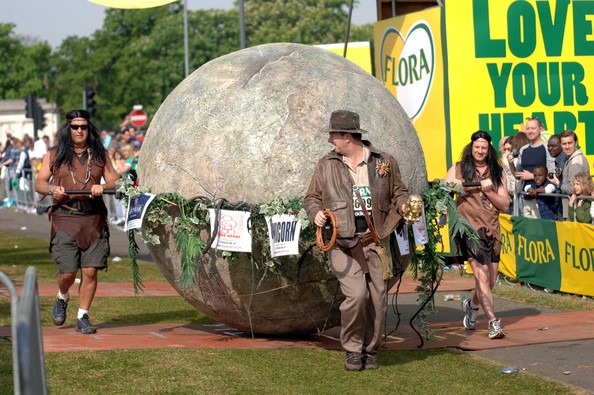 In 2002, Lloyd Scott, wore a specially adapted antique diving costume to compete in the London Marathon. Weighing in at an eye-watering 130lbs, Lloyd completed the marathon in 5 days, 8 hours, 29 mins and 46 seconds. In the process setting a world record for the slowest marathon time ever recorded.

Lloyd Scott, you’ll notice a theme here, also ran the London marathon in 2007 dressed as Indiana Jones. Not content with running a marathon in a leather jacket he also decided to pull a 350lb boulder to recreate the famous opening to the film, The Temple of Doom.

Another one for Lloyd. In 2006 he ran in 100lb suit of armour. Again not satisfied with that level of discomfort, he also decided to pull along a 200lb dragon. This is around the same weight as an adult male panda. 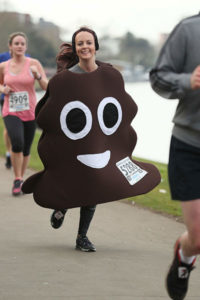 As you can see fancy dress and mascot costumes are a very big deal when it comes to marathon culture. In fact, they are expected, and many spectators would be extremely disappointed to turn up to a marathon with everyone wearing only traditional running gear.

Of course, you don’t have to be in a marathon to wear a mascot costume. Whatever the occasion or need, Promotional Props and Costumes are always happy to guide you through the many different ways of creating a mascot costume. For more information, please give us a call or send us an email.

We are happy to work from an existing design, or we can create a new bespoke character costume just for you; the choice is yours.